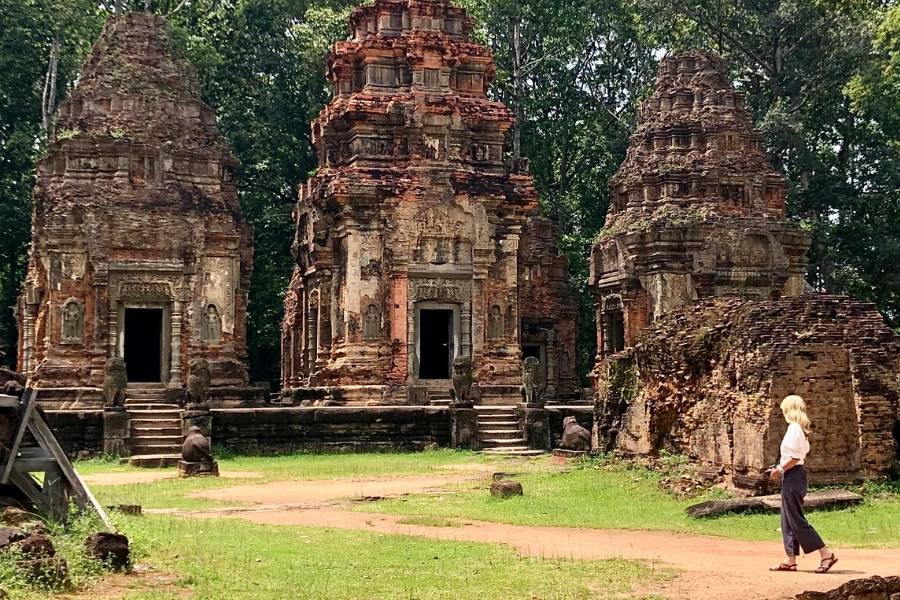 Preah Ko – A Unique Temple away from the Crowds

The towers of Angkor Wat and faces of the gods at Angkor Thom are the superstars of Angkor Architectural Park – and they’re spectacular. But beyond Siem Reap and the crowds, is a small but stunning monument: Preah Ko, the oldest surviving temple in the region which pre-dates its better known neighbours.

I visited Cambodia in early October, near the end of the monsoon season when visitor numbers are vastly lower than in the dry months of November to April. Even in low season tour buses filled the parking lots and travellers with selfie sticks jostled for photos.

I was actually happy to see visitors during “rainy season”; developing countries like Cambodia benefit greatly from tourism that extends beyond the peak months. Still, I tried to imagine how much more crowded it could get in high season, when Siem Reap, and Angkor Wat in particular, are flooded with tourists.

After a couple of days touring Angkor Wat and the temples close to Siem Reap with my friend Clemencia, she wanted some time to relax and I was ready for a break from the crowds.

I had read about the Roluos Group, the oldest surviving monuments in the area. So I ventured east into the countryside with a guide and driver.

(I arranged a guide through my hotel, the Shinta Mani. There are also organized tours of the temples which are further from Siem Reap.  Some people also book a tuk tuk (motorized rickshaw) or taxi for several hours.) 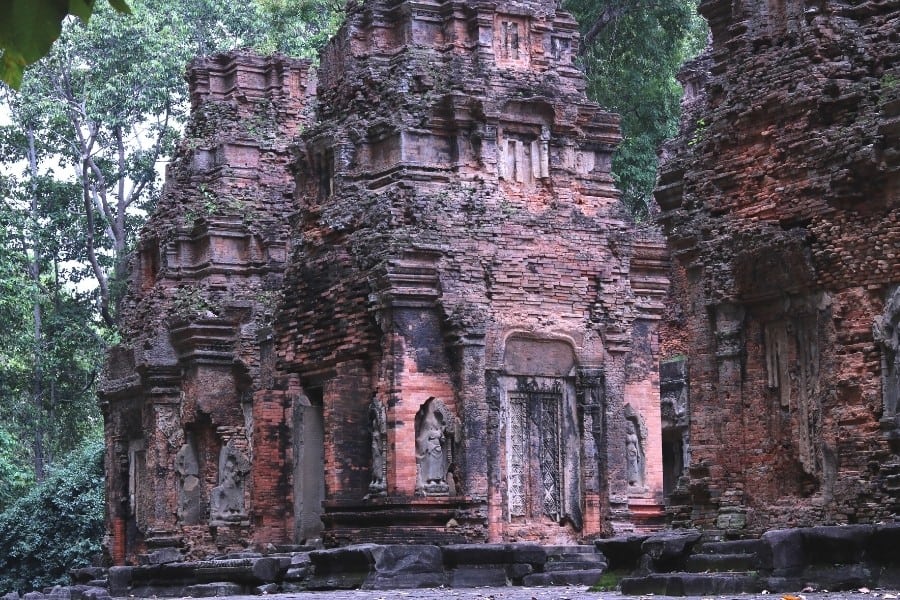 A Day Trip from Siem Reap

Several months of monsoon rains had turned the rice fields a startling shade of green.  About 75% of the annual rainfall occurs in this “green season” and everything was a shade I will call emerald, although I’m not sure that does it justice. Children swam in rivers which had swelled to the tops of their banks. I was ready to join them. The downside of visiting at this time of year was it was hot. Very hot.

Still, I couldn’t stop smiling. I was in Southeast Asia for the first time in 25 years – a result of my decision to make travel a bigger part of my life in my 50’s and beyond. It felt invigorating. 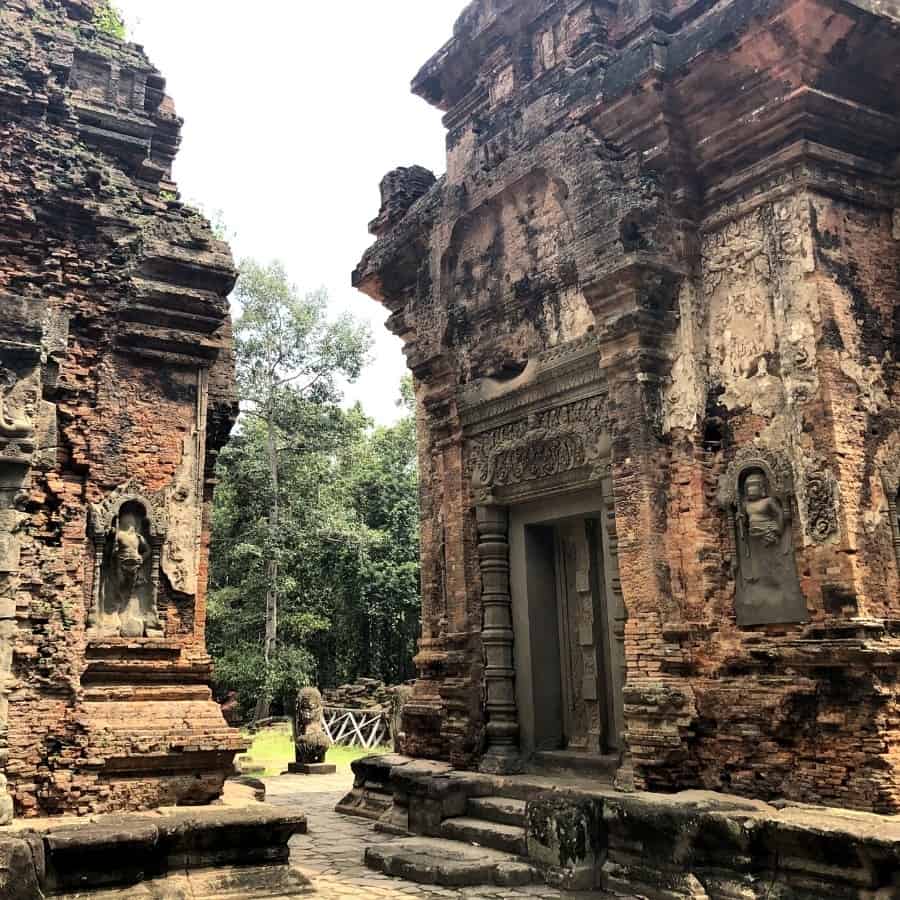 About 30 minutes drive from town, we arrived at a checkpoint where I had to show my temple pass. (The same Angkor Pass provides admittance to all the Roluos Group temples). We pulled off the narrow road and into a small parking lot.

The first thing I noticed was the absence of tour buses. Where was everybody? I saw one Cambodian family leaving as we arrived. (All of the Angkor sites are always free to Cambodians – what a fantastic policy.)

I grabbed my bag and camera and we walked toward the complex. A cavalcade of dragonflies appeared, swooping in circles, like skaters practicing figure eights. Preah Ko is a fraction of the size of Angkor Wat, but it is absolutely beautiful. Six towers sit on a raised platform surrounded on three sides by a tall forest.

The sun shone through the trees giving it a magical quality, as though we had stumbled upon a secret place. It was strangely quiet; with the full complex now in view I realized I was alone here, other than my guide, Mr Barung.

Preah Ko (which means the sacred bull) was built by King Indravarman I in 879, more than 200 years before Angkor Wat.  It is named for the three bull statues of Nandi, the bull guardian of the home of the Hindu god, Lord Shiva. 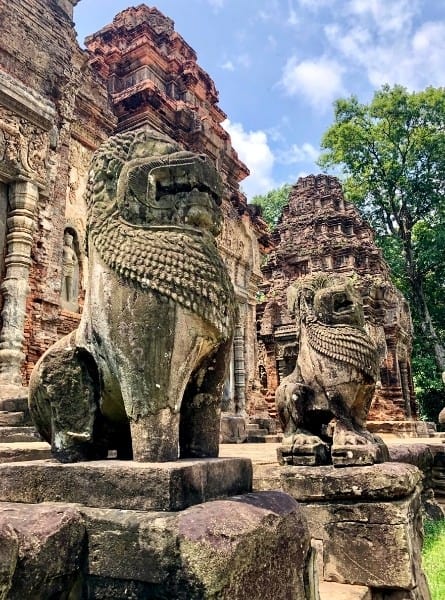 Beyond the bulls, I was greeted by guardian lions which flank the sets of steps up to the platform.

The six towers are constructed of brick rather than sandstone and I was immediately struck by the intricate carvings on the buildings. The details were different than what we had seen at the other temples. And maybe I was also noticing little things in a way I hadn’t at the big monuments, which were both grander in scale and filled with people. 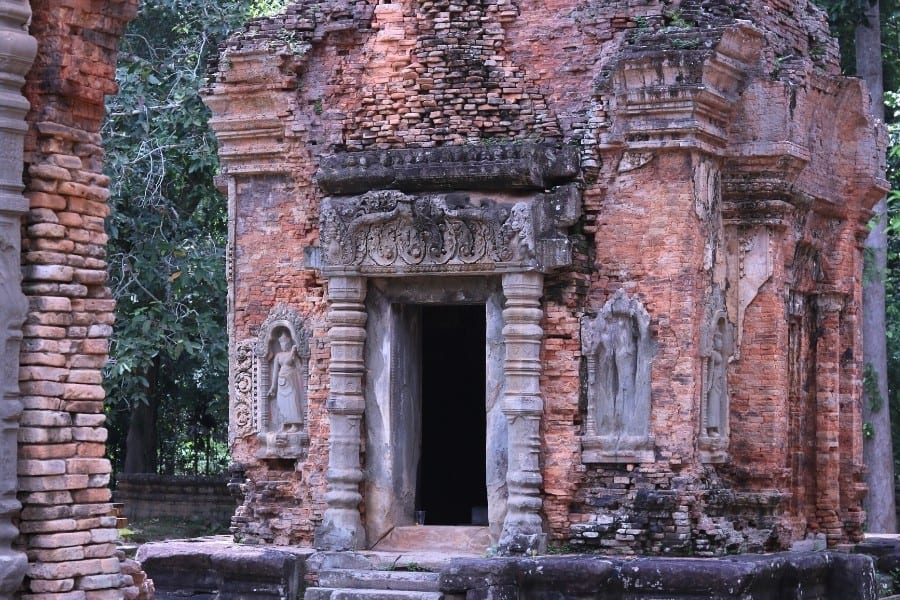 All of the Angkor Park monuments had felt surreal – too incredible to be believed.  But something about this place was special. Mr. Barung led me around the towers and told me stories of the Khmer Empire and the ancient city this had once been a part of.

The Roluos Group dates to the 9th century. This area was the city of Hariharalaya, the capital of the north Khmer Empire, with Preah Ko the oldest surviving monument of the city.

The capital was later moved to Angkor Thom, which I had visited the previous day and I really loved The Bayon.  The Khmer Empire dominated Southeast Asia for over 600 years, ruling much of today’s Cambodia, Laos, Thailand, and Vietnam.

Hinduism was the dominant religion when Preah Ko and most other Angkor monuments were built, and Vishnu and Shiva were the most revered deities. They are represented at Preah Ko such as in the intricate carvings of the lintels above the doors. I wandered among the towers, admiring the carvings and the beautiful Khmer text carved into the stone.

During the hundreds of years of the Khmer Empire, the dominant religion changed several times from Hindu to Buddhism; the latter is most widely observed today, by about 98% of the population. 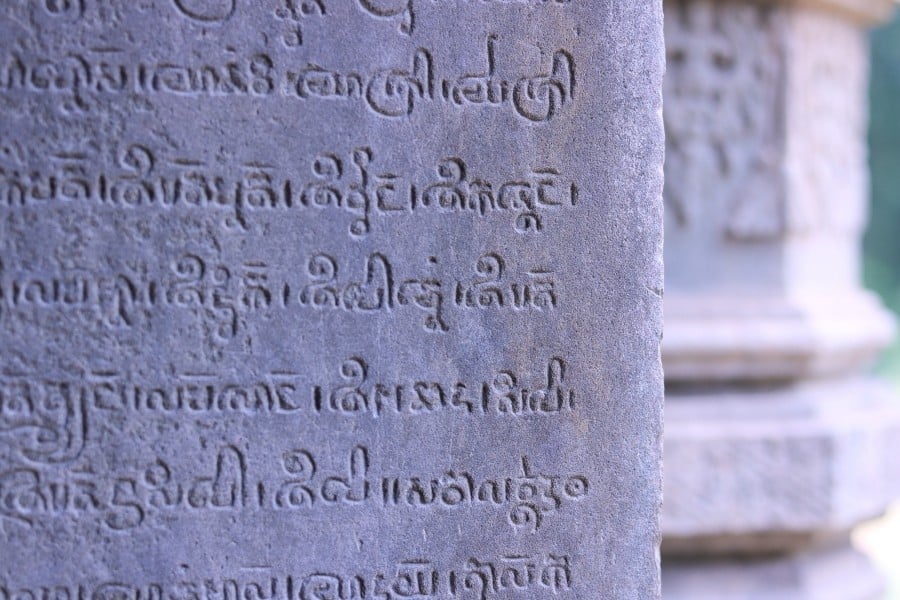 We were only 12 kilometers from Siem Reap but at Preah Ko I felt I had travelled to a different time. The quiet made it easier to imagine the ancient world this was a part of. It also made the wind in the trees sound a little like whispers of the gods. It was one of the especially magical experiences of my trip and reminded me how worthwhile it is to venture beyond the most famous attractions, when you have the chance.

If you enjoyed this story, I’ve written about another special experience in Cambodia: Cambodia’s Tonle Sap Lake & Floating Village. 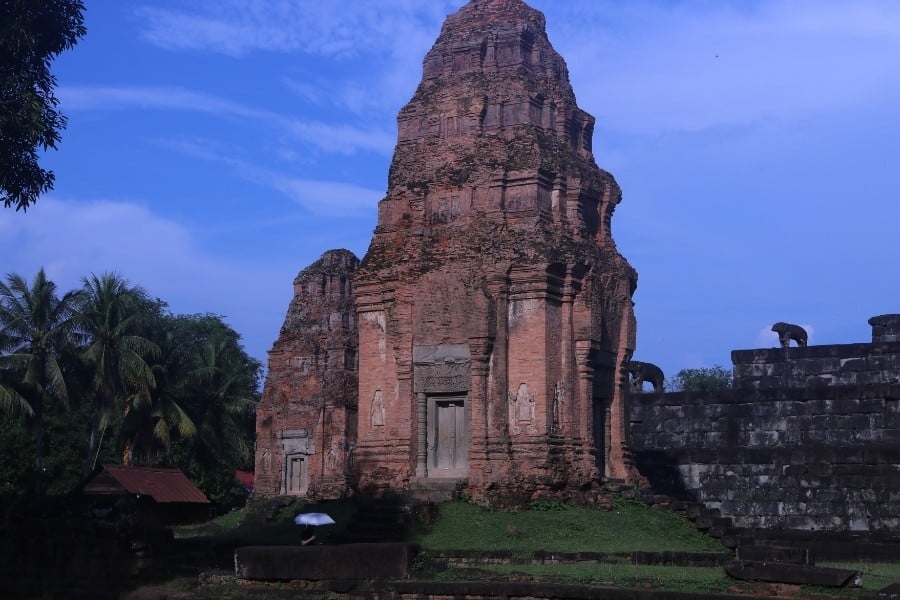 Other Less Popular Monuments to Visit

Beyond Preah Ko there are three additional temples which are a part of the Roluos Group: Bakong, which I also visited and enjoyed, although it was much busier and louder – a local band was playing to celebrate the festival of the dead. Lolei and Prei Monti are the two others I did not have a chance to see.

Other less-visited temples to explore near Siem Reap:

Srah Srang: the “Royal Bath, a scenic reservoir built in the 7th century.

Phnom Bakheng: the ancient temple on the hill know for gorgeous views and stunning sunsets. 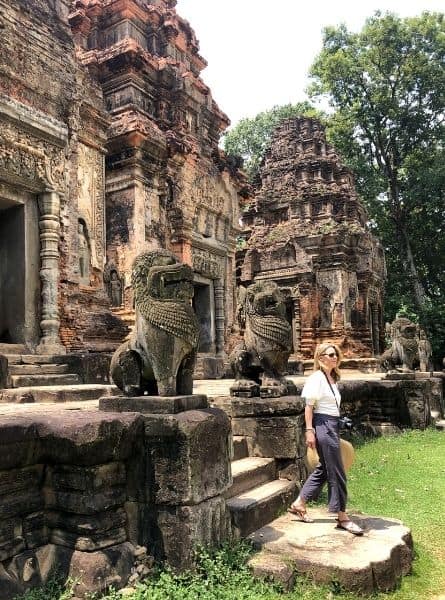 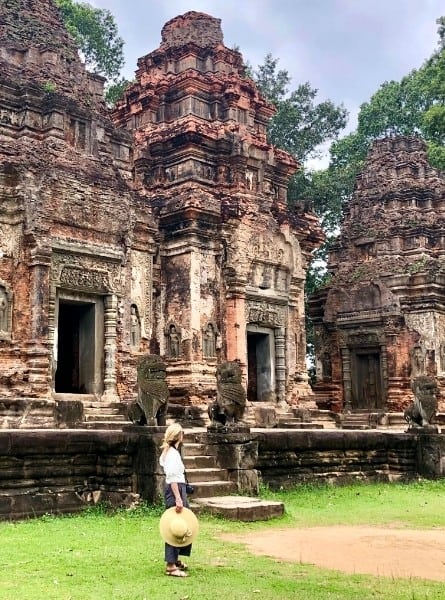 In addition to being my guide, Mr. Barung took all the photos I’m in. When you find yourself alone at an ancient temple complex it’s nice to have some beautiful photos to enjoy long after you’re home. I am grateful to Mr Barung for being a lovely guide and photographer. 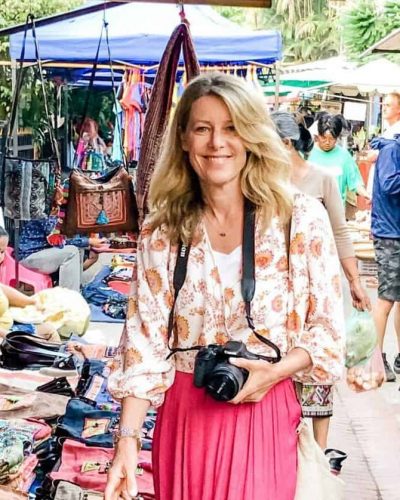 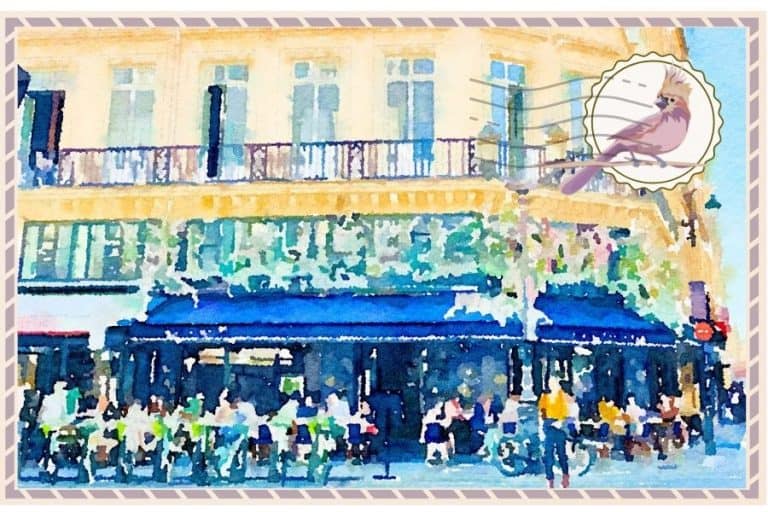 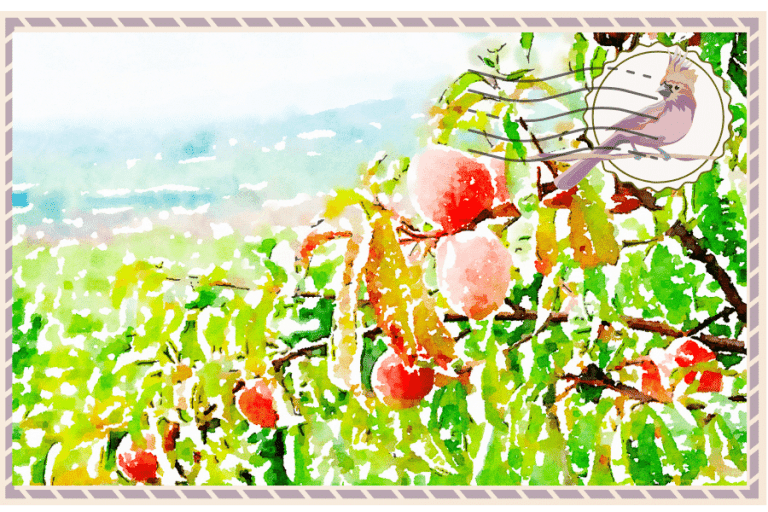 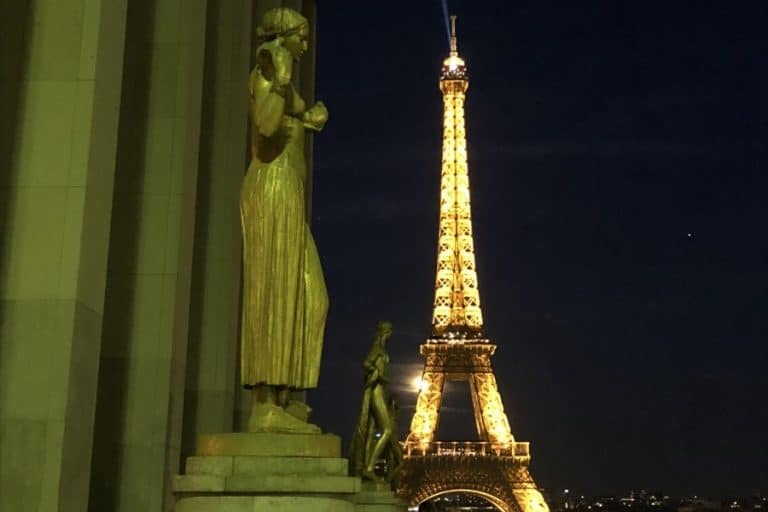 Where to Get the Best View of the Eiffel Tower 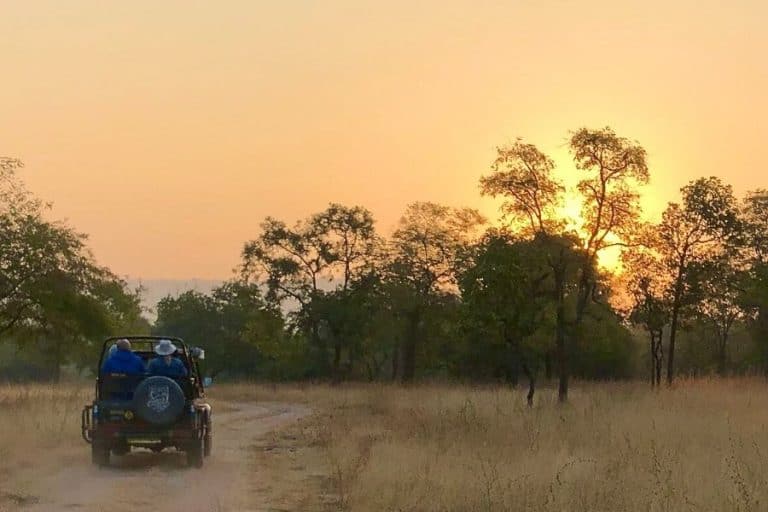 On Safari in India in Search of the Bengal Tiger 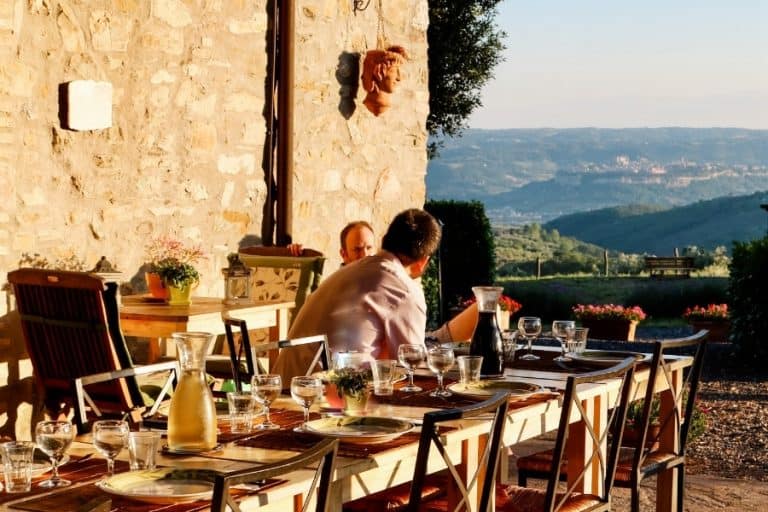 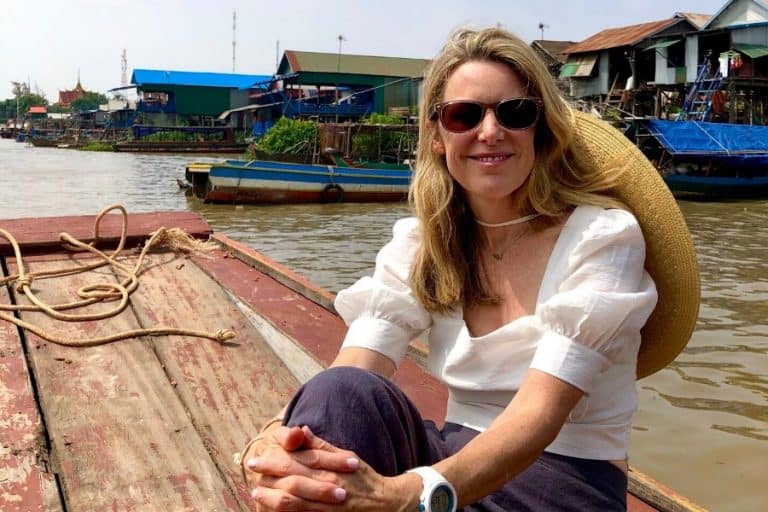